Are you looking for a handheld thermal monocular with great quality at an affordable cost? The Pulsar Axion series is the best choice as they are cost-effective yet don’t compromise on the quality.

Pulsar Axion XM30 is one of those thermal monoculars that comes with compact size and price. There are two other models in this line Key XM30 and XM38.

The basic differences between Key and regular XM models are, Key models don’t have video recording ability, streaming app, and image quality is low when compared.

They offer casings, quality lenses, powerful thermal sensors, and high magnification which is suitable for every user.

This review is about the Pulsar Axion XM30 thermal monocular that will help you decide if its features and specifications meet your requirements or not. 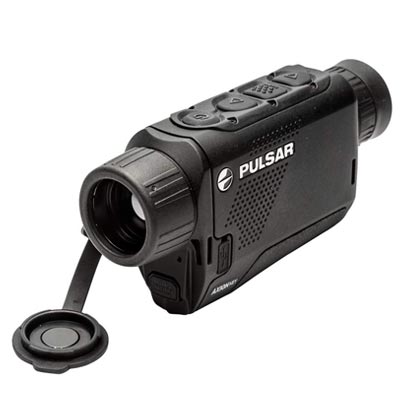 The Axion XM30 has a 320X240 thermal sensor, 12µm thermal core, and a 50HZ refresh rate. The 12 mm pixel pitch helps to reach the higher observation distance and optical magnification.

There are three magnification ranges come with this unit. It also has 4x base power and a premium grade Germanium objective lens.

With its eight color palettes, we can view the target in several color modes. The hot black mode is used for detecting the wildlife at night, and the violet mode is used for identifying the objects faster.

In the activation time, the picture in picture mode displays two images, and the second small image shows at the top of the screen with magnification. This image will help you to zoom on a target.

The Picture in picture digital zoom has the 4X digital zoom, you can zoom the picture by the continuous zoom, and it also has the stepped zoom like 2x, 4x.

This compact thermal monocular is IPX7 rated for all-weather conditions, which means the device will not be affected even if it is submerged to water up to 3 feet for 30 minutes. So you can carry this pocket-sized thermal monocular to any weather season for hunting.

The housing of this XM30 compact monocular is made of rugged magnesium alloy to offer lightweight and reliable usage to its users.

If you are using the Pulsar thermion thermal rifle scope, then choosing Axion XM30 will be added benefit for you because both Axion and Thermion share the same APS3 Li-Ion battery pack. One battery pack for two units manages things easy and simple.

Based on the temperature measurement, this battery can power the Axion monocular for 3 to 4 hours.

The very first change that impressed me about this monocular is in its internal power components. Yes, this Axion thermal monocular claims instant start-up time from the off mode and has a standby mode.

So the device can power up within seconds with a touch of the power button, and with the standby mode, it automatically turns off the display to save the battery.

I have been using Pulsar Helion and Sightmark 320RT, so I have first compared the Axion with these two units.

Axion is very much compact and lightweight than these two. It weighs just 8.8 ounces that fit in your palm. You can hang it around your neck or store in your pocket. The thing is you won’t feel the weight at all. The lightweight of this unit makes it suitable for spotting and scouting at day and night.

Hunters who used to choose a night to hunt can relate this. Because, having a lightweight unit like Axion XM30 while night hunting with heavyweight rifles, tripod, and battery units surely a big plus.

Next to the usage, Axion XM30 is very easy to set and use. You don’t need to spend more time on instructions, within one or two minutes you will excel at its controls.

Photo and video recording with Axion XM30 are effortless than you thought. It has the 16 Gb memory storage to store all your hunting adventure videos and pictures. It has intuitive controls and buttons to navigate.

Using the Stream Vision app, you can stream your actions to other devices and download photos and videos. The stream vision also helped to connect your smartphone or tablet as a second display or remote control, which also helps to adjust settings, upgrading the firmware, direct image streaming, and shifting the recorded files.

We tested the Axion XM30 thermal monocular for its image quality at 300 yards. We could see a person and a dog of coyote size clearly. Later, we increased the magnification to 8X and 16X, respectively. The clarity is good at 8X, but 16X is a bit clumsy.

But yes, the best way is testing it while hunting and it did a perfect job there.

As a hunter, most of us liked to record the actions in a rifle scope as we are looking through it all the time. So most of the hunters do not look for video recording options in a scanner or thermal viewer.

But the video capturing in scanner helps to check how the monocular works and captures images. Later you can discuss its image and lens quality. Axion XM30 is best for locating animals.

Pulsar thermal scanner uses thermal imaging technology to detect the body heat of the animals while locating and identifying. Detecting prey is the first thing you should do while scanning. You have to locate and then identify the animal.

For detection and identification, thermal viewers are the best tool. They help you recognize the prey you are watching even at extreme darkness and long-range. Based on the range of animals, the detection will be accurate.

We have tested this Axion XM30 to know how long it can recognize the object or thing accurately.

This entry-level Axion monocular may not identify every small animal in the area quickly at a long distance. But it can detect animals very well. It can discover the animals of hog or deer sized even they are 700 yards away. It can identify coyotes at least 400 yards in an open field.

Sadly, it can’t detect the coyote passing through grass even at 100 to 200 yards.

If you are a first-timer using a thermal viewer, the first thing that amazes you is the way how animals show against the ground. While using black hot mode in cut hayfield, the animals look like black targets filled with snow.

In an open area with no grass, it is easy to identify the hogs at 300 to 500 yards, but the weather condition and tall grass can make the situation difficult.

After testing, we can say it is no lower than a thermal scope. With a small budget, if you are searching for the best locating tool, you can buy this Axion XM30.

Do I Recommend Pulsar Axion XM30?

I would surely recommend this Axion XM30 thermal scanner for every hunter. It does locate and detect very well. Though it is an entry-level thermal monocular, it is the best start-up tool for a game. It offers effective hunting at all-weather and light conditions at a moderate price that is huge for entry-level gear.