FLIR is the Brand that introduces the thermal imaging cameras from the mobile sensor with all the industrial and military applications.

The FLIR One Pro is the latest version of the android thermal camera with more innovative technologies.

It has the VividIR image processing technology to rectify the problems in the previous model camera.

With this feature, the user can view a clear IR image to examine their requirements.

The MSX technology of this product helps for an easy understanding of the thermal images.

This is one of the most affordable thermal imaging cameras in the market.

The micro USB is provided in this thermal camera, by using this, you can connect it with most of the Android devices. 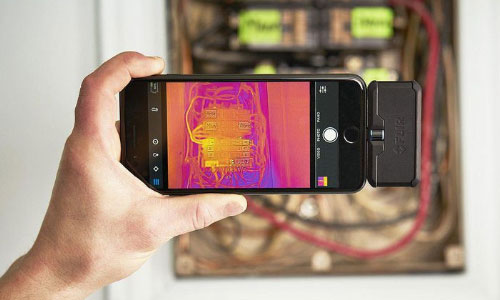 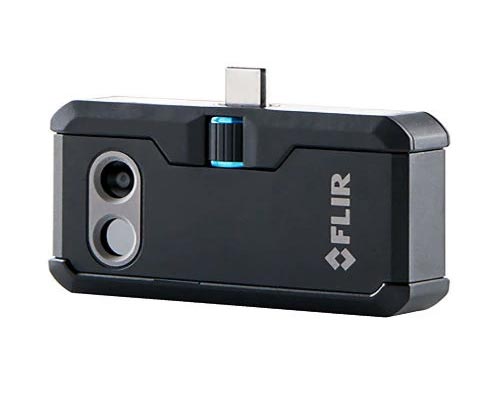 The FLIR One Pro has the rugged construction, the black body and the sharper angle gives the professional imaging equipment look.

It has a blockier look, and the width and height are the same as the FLIR One. When you connect this product with a four-inch screen phone then it may look narrow.

In this version, the micro USB, USB-C, or the connector is placed on the top of the panel of the camera.

It can naturally flush with the panel, but the mechanical wheel is set below the connector gives the extra 0.3 inches, so it can efficiently work with any phone case.

The FLIR One Pro needs a Flir one app to work with Android and iOS.

Once you install and turn on the pro, you can see the thermal readings by connecting it with your phone.

The camera view is the main screen of the app, and it will show the MSX mode live feed from the camera.

The FLIR One Pro thermal core has a high resolution than the Flir One and Flir One Pro LT, but it only has 160 by 120 core, so the own images are shows as broad blotches and vague shapes.

To avoid this problem, Flir uses the MSX image processing to combine the images; by doing this, you can see the large and more detailed view of the image in the visual camera.

The MSX analyzes the outline of the objects that shows in the visual camera and displays the thin line above the thermal image, and it helps to identify the object what you look on the screen.

The MSX view is providing both thermal and visual views, using the menu located on the lower right corner of the screen, and you can choose the viewing options.

There are nine different color palette options available in these cameras; the orange-and purple iron palette is the default option.

You can also choose the thermal reading with 5 color gamuts, grayscale options. The grayscale highlights the coldest parts as blue color and the hottest parts as the red color.

If you are not sure about the color menu, you can use the IR scale options located in the pop-up menu, and it will show the full-color range of the choosing palette with the maximum and minimum detected temperature range.

You can also adjust the color and temperature range. The Pro automatically adjusts the range based on the temperature, but you can also lock the range whatever you want to look at.

For the accurate temperature measurement, it offers three different temperature meter with the crosshair button at the top of the screen.

The single spot, a larger circle, and the rectangular space are the options for measuring the temperature.

You can see it in the center of the frame; also you can drag it with your finger to find the temperature of anything in the frame.

Usually, a thermal camera will show an approximation result of the thermal image, because the texture and distance has a chance to affect the heat measurement, but this FLIR One Pro will give an accurate result to you.

Using the Flir app, you can capture the photo, video, and time-lapse recording in 1,440-by-1,080 resolution. In this camera, the videos are saved in MOV or MP4 files.

The FLIR app maintains all the data for thermal imaging, and it provides options for change in between thermal, MSX, and visual views; also, it allows you to change the palettes and adjust the temperature range for the particular palette.

You can also make the changes in the picture after it is taken. You can save the modified image in the standard JPEG file on your phone.

The FLIR One has the 160-by-120 thermal resolution, the clarity of the images in this thermal imaging camera is four times better than the Flir One and Flir One Pro LT, this is one of the biggest advantages of this camera.

Due to the identical visual camera and the MSX processing, the photos and videos of this thermal camera are captured in the same resolutions, and the extra pixels will help you to get more thermal detail of the picture and video.

In this FLIR One Pro thermal camera, the shapes and border of the cold and hot spot will show with a huge difference. The image quality and the usability of this camera is producing a massive jump from the other versions.

The FLIR One Pro is the most powerful and affordable thermal imager for the phone. When it’s compared to the Flir One Pro LT and Flir One, the feature of this Flir One Pro justify the price, and the ability to measure the high temperature is extra good for some, and essential for others.

Using the multiple metering option for the temperature measurement to get clear details for every point of the frame is the most significant feature compared to the Flir One.

Thermal imaging is essential for the biggest factors and electrical experts. The FLIR One Pro is the best choice for the plumbers, home inspectors, and smart home enthusiasts at an affordable price.

Moreover, the Flir One Pro is an attractive option for the casual tech enthusiasts who are looking for a device with a lot of applications at home.

The feature in this review will make your work more comfortable and perfect. In this review, we give a clear idea about the FLIR One Pro Thermal Imager for Android. We hope this review about the Flir One Pro will help you with your purchase.