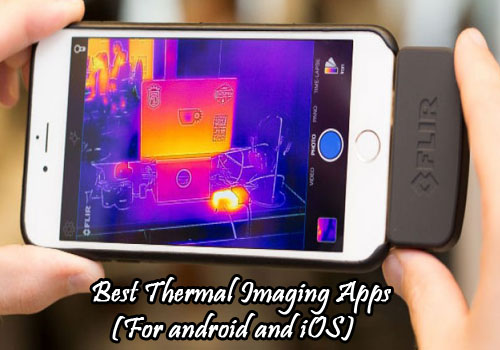 Thermo Gears is reader-supported. When you buy through links on our site, we may earn an affiliate commission.

You need to purchase a thermal imager before using thermal imaging apps in an android or ios mobile. Thermal imaging output is different than what you see from a normal mobile camera. Below is a picture showing how a thermal pic would look like.

Flir has two models that work with mobile phones. You can buy the flir one pro ( For iPhone/iOS  and For Android Mobiles ). There is another lower-end model flir one, check it here. Having any of these devices attached to your mobile can get you crystal clear thermal images and you’ll be able to look into the dark without switching on your mobile torch.

Get the Android app here for flir one models

There are other notorious thermal imagers for android and ios. They are listed below.

Keep in mind, whatever thermal imaging app you install, without purchasing a separate thermal imager, it won’t work in your mobile phone unless you have a phone like cat60

Android is the most common mobile OS as of now followed by Apple’s iOS platform. The android OS is effective and it can operate several useful applications at less cost. There are many types of android OS-compatible apps available in the Google play store, the top-rated free android thermal imaging apps are listed below.

Seek thermal is also an android thermal imaging app that works along with the sleek infra-red camera. This camera can be fitted easily in almost all the android devices and hence, it can be used effectively.

This XR thermal imager will do all the tasks and has thermal imaging technology, the same as Seek compact thermal cameras.

This easy and intuitive add on for smartphones is the best option to budget buyers who are looking for an alternative for the expensive thermal cameras around.

Range: Seek XR Thermal Camera captures images from up to 1,800 feet away which is supreme to other thermal imagers.

Size: Seek XR thermal camera is very sleek and compact, it is highly portable and adds no extra weight to your mobile phone.

Temperature Range: The temperature range of this Seek imager is extreme and between -40°F and 626°F.

Thermal Sensor Resolution: The thermal sensor resolution of this XR thermal imager is 206×156 which is high when compared with other mobile phone thermal imagers.

Power: Seek XR thermal camera does not need any external power supply or battery as it can be powered by the attached smartphone itself.

This HTI Image is a complete function of Android Smartphone APP for HT-301 thermal imager.

HTI HT-301 thermal imager has a 384 x 288 IR thermal sensor with that you can measure the energy losses, heat and cold spots, electrical issues, detect animals in the dark or low light conditions.

It has a 25Hz refresh rate so every time you capture images and record videos, you get crystal clear images and videos.

Using this thermal imager with your smartphone, you can detect temperature measurement from -20 ° C to 400 ° C which means it detects minute heat difference also.

With the HTI Image app, you can edit the thermography settings such as Correction，Reflectopm，Amb temp，Humidity，Emissivity，and Distance.

It has 6 color palettes to choose the perfect color to see the image based on the environment, weather condition, and type of target.

You can switch to the Visible light spectrum you want. You can change the temperature unit between Celius and Fahrenheit. There is an option to set your preferred language that makes the control and access over the imager easy.

Smart Thermview mobile app developed by CEM to use with their CEM T-10 thermal imager for smartphones. This thermal imaging app is completely free and available in Google Play Store that works for all Android mobile phones and tablets.

CEM T-10 thermal imager needs USB-C or Micro-USB to get connected to your android mobile phone.

CEM T-10 thermal imager is one of the compact yet stylish mobile add-on for thermal imaging and night vision.

This thermal imager has a 206×156 pixels thermal sensor that detect each and every temperature variation in the detected area and give you thermal images with various color modes.

The temperature range it works perfectly is between -10℃ and 330℃. With that, you can find and fix the issues earlier that are not visible to human eyes.

You can view the captured images in real-time with nine color palettes based on your requirements.

It offers 330m of detection, 83m of recognition, and 48m of identification for any human-sized objects.

You get 36 degrees of field of view and <9Hz frame rate that make sure you get well detailed and contrast images and videos.

You can export the captured files as PDF and share thermal images with your friends and family.

This is also one of the useful and important thermal camera apps that can record pictures and videos in dark and dim conditions. This camera app is effective and it also supports camera flash. This is a real-time application that can record and store the recorded images and videos effectively. This app is widely used along with the thermal camera.

This is a real-time android app that can capture the images effectively by stimulating the IR-camera. With this app, the user can have a fun time in the dark. The image obtained by this app is of high quality and hence this app ranks high in the ratings. This app is suitable for the android mobiles that have an inbuilt IR sensor. This app will not function in the mobiles without built-in sensors.

True night vision is also a thermal detector app that can be used effectively for determining the objects in the dark light. This app generally triggers the IR sensor placed within the camera and enables the user to view all the heat bodies in the night time. This app is specially designed for iPhones and it produces high-resolution images.

These are the top-rated mobile apps for thermal imaging.

If you feel this article is useful, share it with your friends on social networking sites.

Kim Goodwin holds a Master's in thermal engineering from the University of Rhode Island. At Thermo Gears, she reviews most equipment that uses thermal imaging technologies.
All Posts 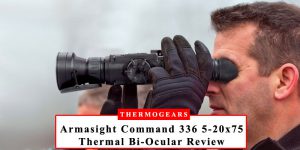 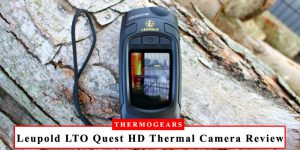