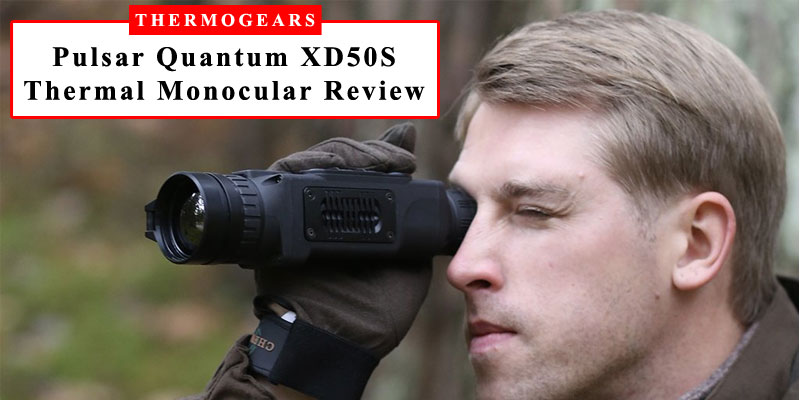 Although binoculars have reached a large scale in the world market, monoculars are also widely used by a variety of experts for tactical and hunting purposes in current days.

In particular, Thermal Monoculars are a defined device with high-quality features. There is no doubt that they are providing a high-quality service to the techy enthusiasts.

Today, most thermal monoculars are equipped in many countries around the world with varying prices and countless choices.

But not everyone can spend as much time learning about the best of them. So we’ve chosen the best one of all and presented it here.

After the thorough research of this device, we concluded that Quantum XT50S designed by Pulsar is one of the best thermal imaging monoculars in the market.

Now we can lucidly view the detailed review of the Pulsar Quantum XT50S Thermal Imaging Monocular in this post.

The main reason to build it with the plastic material is that aluminum and magnesium transmit heat of internal components, but plastic doesn’t transmit.

With this reinforced construction the monocular effectively operates even in the worst environment and extreme weather conditions.

In addition, all the materials used to build this construction come with water-proof, dust-proof, and impact-proof aspects.

To protect the device from damages caused by fall, the rubber armoring is fitted on the exterior body of the unit, which ensures grip.

The Quantum based digital thermal imaging monocular is configured with the IR sensor that has a resolution of 640 X 480 pixels.

To offer a great thermal vision the device is composed of thermal sensitivity of 384×288 pixels with 17Micron.

After that, this lightweight thermal monocular has an image frequency of 50 Hz, due to this high frequency it provides static and convenient detection.

You can comfortably handle this thermal monocular even when observing the rapid moving objects.

Quantum XD50S Handheld Thermal Monocular is configured with a Stadiametric Rangefinder to provide better performance in the field.

Moreover, the performance of the tactical monocular is done by the shape of the rangefinding reticle.

If there is a requirement of calibration to increase the image quality then the user determines on his own calibration used by the H Mode.

For operating this semiautomatic mode you need to press the “Cal” button of the monocular.

The M Mode is also called as “Silent Mode” which is done by pressing the button while the cap of the lens is closed. This mode is highly recommended for hunting applications because of silent operation.

The detection range of Quantum XD50S is over 1300 yards for the human target, which means it provides a maximum range of detection to the user.

But this detection range varies with things like humans, wildlife, and so on due to the variations in measurement.

This allows you to make a smart choice when purchasing a thermal monocular so for tactical applications.

The hottest and coldest areas are highlighted by the color palette that you have chosen with different colors. This effectively works in hunting, surveillance, and rescue fields.

There are three distinct operating modes available in this XD50S model to deliver enhanced images in specific detecting conditions.

The CITY mode offers an enhanced contrast to the images for overcoming the clashes of external issues.

The FOREST mode offers low contrast to the images for retaining the quality and focus.

The IDENTIFICATION mode concentrates on the hottest place in the detection area while observing objects.

The upper panel of the device consists of control buttons to control the main functions such as turn on/off the unit, color inversion, sensor calibration, digital zooming, and more.

These functional buttons are equipped with the user-customizable features to provide comfortable usability for both bare and gloved hands.

Next to the optical lens, there is one controller wheel to manipulate the contrast and brightness of the monocular. Thus you can set up both levels depending on your requirement.

The device has the ability to instantly power on when the user triggers it, which takes less than 5 seconds to wake up.

As well as, to prolong the battery and monocular life it has a self-contained operating time system.

When the user utilizes its Display Off function, the observation work will be stopped due to save the power and prolong the operational time of the monocular.

When the display is turned off by the function, all other operations are still working. This makes the observation very effortless when restarting the function.

The device is powered by 4 AA rechargeable batteries to offer 5.5 hours of continuous operating to the thermal monocular.

And you can significantly increase the operating time of the monocular with the help of external power supplies like Pulsar EPS3/EPS5.

A data panel located in the down posting of the screen delivers the status of numbers and blue icons of the monocular.

The respective icons will appear on the upper side of the screen when you switch between distinct functions such as brightness/contrast setting, color inversion, and digital zoom.

Annalena is carrying her rifle with passion and pride for her love of the outdoors and the experience of hunting. Her most memorable hunting season was back in 2015 when she and her dad were drawn for special elk tags. That allowed them the chance to fill their tags with an actual bull elk rather than a spike. That year both her and her dad came home with their first trophy elks, with hers a 6 by 6 pointer and her dad’s a 6 by 5.