FLIR one vs Seek compact 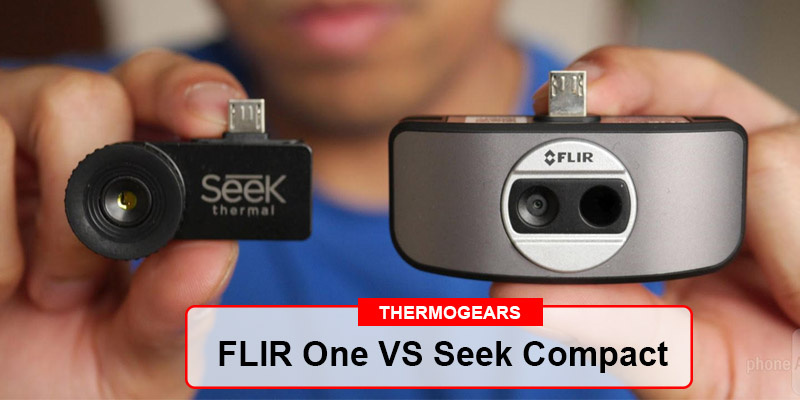 A Thermal imaging camera is one of the great innovations in this up growing world, also it’s a type of thermographic camera that is used in firefighting. It’s not that tough to use this camera because they are typically handheld and are constructed using heat and water-resistant housings and the entire body is ruggedized to overcome the hazards of fireground operations.

In this section, we’re stepping into the detailed comparisons between FLIR and Seek. Both of these manufacturers are well-known for the thermo industry. The seek and FLIR manufacturer comes with various models hence you can choose the best based on your needs.

About FLIR and Seek:

FLIR was founded in 1978. FLIR and Seek specialize in software and hardware for commercial and residential use. The FLIR and seek thermal imaging camera is mainly designed for smartphone use. The seek compact, and FLIR delivered a high-resolution thermal image. FLIR comes with the most innovative MSX technology that provides high resolution standard thermal images. It offers standard products for the user.

Seek was built in 2012 and recently seek started to develop the thermal imaging camera for law enforcement use and security purpose. 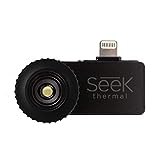 Seek compact vs FLIR one

FLIR one is 3rd generation is one of the powerful thermal imaging cameras which gives you the complete power to see in total darkness and detects the problems easier. The thermal and visual cameras can create HD images that are very easy to assume.

The user can set a camera to display a thermal picture, but the sensor resolution is low so that you can use MSX. This updated FLIR gen 3 makes you detect high temperatures. Its powerful battery gives continuous performance for up to 1 hour, and it will take 40 minutes to charge.

FLIR One PRO has a lot of innovations when compared to FLIR one, this infrared camera allows you to find the hidden electrical problems, water damage, and other heat-related problems. All the Android and iOS users can make use of this high-tech camera. FLIR one PRO has Wider temperature detection, contrast improvement, 160×120 thermal resolution, on-screen spot meters, and on-screen IR meters. It has a visual camera that comes with a high-resolution thermal sensor, which delivers clear pictures. The FLIR one PRO is an excellent option for Professional use.

The Seek Compact thermal imager has all the standard features and specs that make the effective Seek compact and increase the accuracy in generating thermal images from nearly double the distance of the regular compact. The Seek Thermal compact All-purpose thermal imaging camera is the perfect tool for DIY homeowners, builders, engineers, contractors, etc. To make this wonder just transform your smartphone or tablet into an all-purpose camera with the 206 x 156 thermal sensor.

It has a higher native thermal resolution and high-temperature detection range that starts from -40 degrees F to 626 degrees F. The seek compact helps you to identify your surrounding problems, such as inside pipes, home heat, and it is useful for home security needs too.

The seek compact detects your home problem, and can be used for the building inspections too. The thermal camera mostly used by the hunters. The thermal products allow you to see the different features of the system from air leaks, missing insulation, energy loss to electrical short, a falling motor, and missing insulation. This device can be used to identify unbalanced load in an electrical circuit, lost connections, spotting the overheating motors, and more. This thermal camera is an excellent option for hunters’ needs.

How to use FLIR one and Seek compact

Things to consider when buying FLIR one

Will my Phone work/ tablet work with the FLIR one?

The FLIR one is the most advanced modern device, it can work with iOS and Android devices. The FLIR improved line includes USB compatibility with the mobile device and the compatibility list available on the website.

FLIR one vs. FLIR one PRO – what are the differences?

Things to consider when Seek compact

Will my tablet/phone work with the seek compact?

Yes,in the latest innovations of seek compact you can directly connect to iOS and Android, Samsung phone has a USB-C input and doesn’t have a native USB-C output. Some Android devices required to have an adapter.

Seek Compact vs Compact PRO: What are the differences in models?

Seek Compact PRO has a higher resolution when compared to Seek compact, and comes with the high-sensitive thermal sensor, high temperature detection. Compact PRO is mostly useful for commercial purposes, they both have the same size.

What is the seek XR?

The Seek XR has the 20 degrees narrower field of view. You can view the distance up to 1800 feet, but seek compact detection range is 1000 feet.

Advantages of the FLIR one

One of the major differences between FLIR one and seek is, the FLIR one has a thermal sensor and a digital camera which allows you to overlay the visible light images so you can get a detailed picture. This device gives a proper context so the thermal images will be displayed with top-class clarity.

Actually, both devices can take video and images, but the FLIR one gives you a few more options. Panorama and time-lapse features allow different versions of the particular object or area you are imaging, thus giving even more insight into the thermal profile.

The panoramic features is mainly helpful in creating an image of a larger area without the need to look at multiple photos in a row.

The FLIR One is most popular on the market. This device helps you to share your image, this thermal camera proprietary app includes a load option. A large number of third-party apps available on the Apple iTunes App Store and Google Play.

Advantages of the seek compact

The seek compact measuring temperature range starts from -40 F degree to 626 degrees F, which is very high when compared to the FLIR one thermal image camera.

The seek compact’s thermal sensor resolution is 206×156 and FLIR one has 80×60 resolution.

The FLIR One camera has its own battery, and this device needs to be charged every few hours. The seek compact thermal camera can charge from your phone.

The seek compact is attached with a key chain and also has a waterproof hard case. The seek compact, is easy to throw in the toolbox and very hard to misplace. It is water-proof hence you can feel free whenever you go out.

We have explained some of the differences between the seek compact and FLIR one.

Available for both Android and iOS

You don’t confuse about to choose which thermal camera is best for your Phone because all the phone-based thermal imaging cameras can support your phone. The seek compact and FLIR one are the most significant platform available on the market.

The one and compact both have the capacity to display the temperature of the center of the screen, or the hottest and coolest areas within the field of view, both of these thermometers are accurate and give greater insight to the visual.

What can I See in my Thermal Imaging Attachment?

Animals watching: This device helps you to follow the nocturnal animals.

Home inspections: The thermal imaging camera can detect the temperature in your home.

Equipment inspections: The camera can detect to identify a loose connection.

The seek compact and seek compact PRO can easily connect with your iOS and Android. Both are more advanced high thermal imaging cameras and deliver crisp and clear images. The FLIR has a lower thermal resolution, but it can capture higher quality images with more useful options. Choosing the best product always difficult in the purchase, but our reviews help you to select the best product for your needs. We hope our review will help you choose the best thermal imaging camera among the four models.