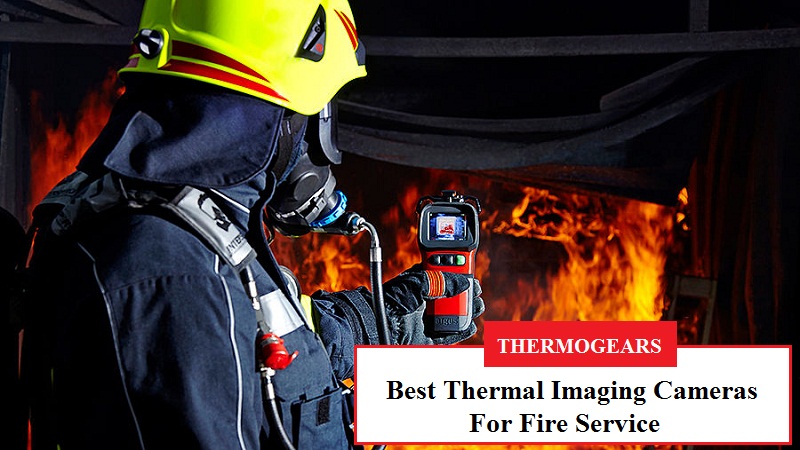 Over the past 15 years, thermal imaging cameras have been added to the fire service field, providing firefighters to almost “see” through the smoke.

The region under fire is completely filled with dust and smoke. In such a region, the firefighter cannot be able to locate the exact place of fire attack, so they use thermal imaging cameras to find the exact place and location of the fire.

The basic constituent of any thermal imaging camera is the IR sensors. The cameras use IR sensors to emit IR radiation and locate the heat.

The FLIR thermal imaging camera is an innovative camera with a Lepton IR imaging engine. This camera offers a resolution of about 80×60 pixels.

The sensitivity of the sensors is also high and it ranges about 150mK. This camera can be operated easily without any special training; even beginners can operate this camera efficiently.

The spot size ratio is about 24:1 and this ratio offers efficient safer distance measurement.

Other than this, the images captured by this sensor can be saved easily and durably, because this camera has an 8-GB memory space for documentation.

The SD card used can be replaced whenever needed and the data from the SD card can be transmitted with the help of USB cable. This camera is compact and durable. Read more at a review of the FLIR Tg165 thermal camera.

The FLK thermal camera is the top-selling thermal imaging camera in the market. This is a handheld camera that can be navigated easily within the fire-affected region.

This camera has a 180 degrees articulating lens; with this lens, the firefighter can see the perfect picture of the image before capturing it. This camera is used to capture images with a 5.7 responsive touch screen capability.

Other important features of this camera are it offers enhanced image quality and accurate temperature measurement.

These features will help the firefighter to determine the perfect spot of fire and remedy measures to withhold the fire.

This device also has an autofocus function with the help of a laser. The laser contains a built-in laser distance meter and this meter calculates and determines the distance of the target with high accuracy.

These are the top-rated thermal imaging cameras for firefighters. If you feel this article is useful, share it with your friends on social networking sites. In case you are aware of any other best product, write to us so that we can include those too.

Many firefighters know when they enter a raging fire that thermal cameras help protect them, and it can help them to save the lives of others.

Here are some thermal imaging ways that can help you do these things.

Thermal cameras used in firefighting applications are the ability to detect thoroughly, even dense smoke is one of the most significant advantages of those cameras. Because a thermal camera doesn’t detect visible light and instead detects IR radiation, the smoke in a room does not register on the camera’s processor, allowing users to see even the most traumatic of detection of trapped people, or to pass through an area safely.

Firefighters may face many unseen dangers or problems that they do not see when responding to motor vehicle accidents, especially at night. Thermal imaging cameras have proven extremely helpful as a device that helps firefighters during the day or night accidents or in low vision conditions such as snow or fog.

A handheld or helmet thermal imaging camera can be a great tool for creating a safe work scenario in a Motor Vehicle Crashes (MVC), helping firefighters to solve three visual problems.

• With thermal imaging cameras, estimate the scene for spilled fuels or other hazardous materials.
• Promote the search for unaccounted tenants of the vehicle.
• Finally, this will helps to determine the scope and magnitude of motor vehicle crashes. And, also helps to determine the number of vehicles and their location completely.

The use of a fire helmet-mounted thermal imaging camera by the incident commander or security officer may be useful in tracking personnel during dark or other low-visibility situations.

Firefighters are being called to find injured or missing people. Often, firefighters do more of this work than fight fires. The ability to see in the dark of a thermal camera makes the device a valuable tool for Search and Rescue travelers.

Thermal cameras measure the temperature from a distance, which helps to protect firefighters against a dangerous event known as a rollover, a state of fire in which superheated gases are stored on the ceiling in an enclosed area ignite.
Respondents know that by making a change, they can act instantly and appropriately by monitoring the temperature of the ceiling with a thermal camera while trying to cool the smoke.

Conditions can lead to a complete explosive fire several meters away from its last source. By additional extinguishing and cooling the area, firefighters can prevent automatic self-combustion.

Thermal Imaging Cameras are very useful in helping firefighters to quickly identify hot spots and create durable embers, as well as pinpoint the exact location of the fire’s source and the extent of its range.

Although thermal imaging has numerous applications, the most important ones are the ones that help save lives. It includes tracing suspects in total darkness, assisting drivers or tracking fire victims, and captains in nighttime navigation.

In the future, there is a strong possibility that a personalized thermal imaging camera in a small, battery-powered package will be an essential tool for every police officer, firefighter, security guard, or rescue worker.

Firefighters believe in thermal imaging in a variety of scenarios every day, which allows them to perform their tasks more efficiently and safely while ensuring the safety of those who are burdened with their recovery and safety.

The FLIR Thermal Imaging Camera Firefighting is mainly intended for firefighting purposes and critical conditions, which is rugged, reliable, and economical.